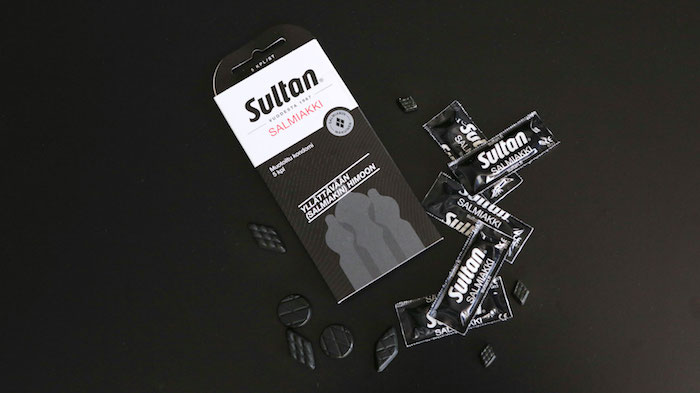 No other country in the world is as excited about black, salty candy as Finns are. Finns are less eager, however, to use protection during oral sex. One of Finland’s best- known condom brands, Sultan undertook a study which showed that only 6% of Finns use a condom or other oral sex protection with a new partner.

Some love it, some hate it – but everybody needs to try it. To bring about change in attitude towards protection in oral sex, Sultan harnessed the national favorite into a licorice-flavored condom to tickle the taste buds of Finns.

“Sultan Salmiakki (“salty licorice”) has truly the taste and scent of our national treat. Flavored condoms are not a novelty, but imagine if they tasted like cookie dough, tamales or Vegemite. We believe that a familiar, national taste can lead towards responsible decisions when things get steamy,” comments Katariina Kurikka, CEO of RFSU Oy, a retailer of Sultan condoms.

The world has seen many condom flavors and this one is definitely an acquired taste. The blood pressure-raising Finnish oddity stands out in the flavored condom section across Finnish supermarkets.

Rated as the happiest people on earth, the quirkiness of Finns is entwined in the brand story of Sultan, one of the oldest condom brands in Finland which turned 50 in 2017. Sultan’s mission is to make safe sex fun and easy, and Sultan Salmiakki is another step in that direction, alongside the internationally awarded F*ck like a Finn campaign.

The agency behind the PR campaign is Miltton, a Finnish agency operating in the Nordics, Brussels and Washington.