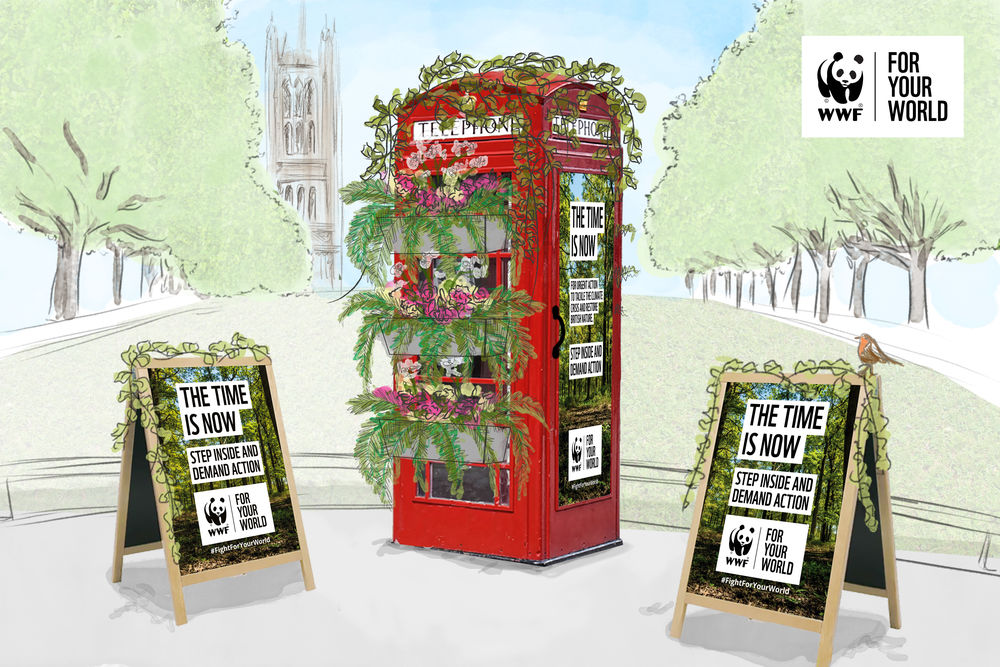 The iconic red telephone box is being ‘reclaimed’ by nature and going on tour. WWF is asking members of the public to make a personal call for the planet and generate conversation around how climate change and environmental concerns are impacting their lives, and the world they want to live in.

Featuring an immersive experience filled with native wild plants and birdsong, the WWF phone booth will collect personal messages from concerned communities up and down the country. WWF will then deliver these messages to politicians and call for bold steps from decision makers to restore our precious nature, stop biodiversity loss and halt our carbon emissions.

This wild phone box will begin its travels in Brighton on Wednesday 19 June – visiting Manchester, Leeds, and Birmingham, before ending its journey outside of parliament as part of ‘The Time is Now’ public mass lobby.

TV and radio personality and WWF ambassador Cel Spellman will be lending his voice to the cause, educating callers about the climate and nature emergency in the UK. Passers-by will be encouraged to step inside the phone box, reconnect with nature and leave their individual voice messages calling for action for the planet.

Fanny Calder, director of campaigns at WWF, said:“In these turbulent times we know that the British public are united about the need for urgent action on the climate and nature emergency. Our travelling phone box will allow people to record personal messages telling MPs what they feel about the catastrophic loss of wildlife in the UK and the looming climate crisis.

“Our leaders need to realise that the British people want to see urgent and ambitious action to halt climate change and to put nature on the path to recovery. We know how to do this, but it will need a serious investment of public funds. We are the last generation who can prevent this crisis from becoming a disaster and we must take steps to invest in our future. The British public wants action – it’s time for the politicians to listen to them and for the Government to act. The time is now.”

The UK is one of the most nature depleted countries in the world, with over a thousand species at risk of extinction. WWF is calling for an ambitious Environment Bill, which will put nature on the path to recovery and it’s pressing for urgent action to tackle the climate crisis, by cutting the UK’s carbon emissions now.

Messages left in WWF’s nature phone box will be delivered to politicians, supporting ‘The Time Is Now’ mass lobby, organised by Greener UK and the Climate Coalition, on Wednesday, June 26. More than 14,000 people from all over the UK are expected to attend Westminster to lobby their MPs in person about the nature and climate emergency we are facing.

Created by the Undercurrent agency in partnership with WWF, the nature phone box takes a quintessentially British symbol and reimagines it as an oasis of nature in busy cities. Made from sustainable materials and featuring UK native plants, the eco-friendly telephone booth will be supported by WWF volunteers as it travels the country. From conception to execution, it was vital to consider and minimize the environmental impact of this campaign. Leaflets promoting the mass lobby have been printed on seed paper so they can be planted once they’ve served their original purpose.

Chris Lloyd, creative director at Undercurrent, said:“This brief resonated with us so strongly and it was clear from the outset that we needed to place the voices of the public at the heart of this campaign. The phone box allows them to speak directly to those t who have the power to make change. The beloved icon like the red telephone box and turning it into a little oasis of UK wildlife, localises the campaign and brings to life the impact of nature loss here at home.”

The phone box tour will be supported by a social media campaign, so those unable to visit either the telephone booth or the mass lobby can still leave messages on the phone line 03331 128505 and add their voices to the cause.

The nature phone box will visit: