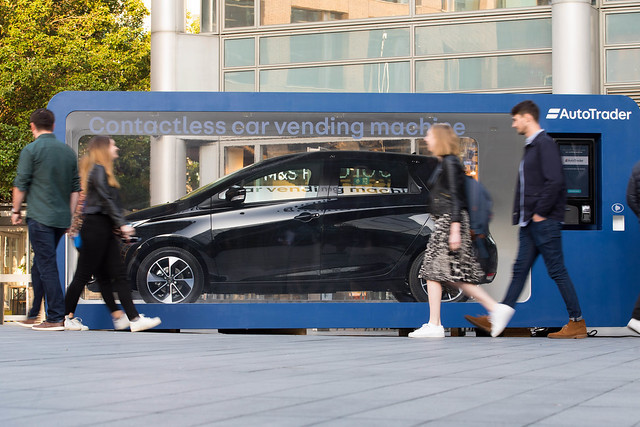 The installation in London’s Spitalfields Market has been created by Auto Trader, the largest digital marketplace for new and used cars, to illustrate its unique pre-haggled prices and transparent price offering.

The bespoke contactless vending machine system, allows purchases up to £21,000, showcasing how consumers can “buy and go” without having to worry about any haggling on the price, by finding a car and dealer through Auto Trader.

A team of six engineers spent three months designing and building the contactless car dispenser. A custom-made point of sale system and key release function was created, alongside an integrated payment and door release mechanic.

The installation features a brand-new Renault Zoe by Lookers Motor Group, which is one of the most searched for electric cars in the country, according to search data from Auto Trader. In just the past month, there have been nearly half a million searches for electric vehicles (463,277) on Auto Trader.

The vehicle comes with a price of £16,000 (RRP of £22,470) that has already been agreed with the dealer, meaning drivers don’t need to worry about trying to get the best price themselves. The price reflects the significant discounts buyers can find on new cars with Auto Trader’s pre-haggled prices. Nearly 7 in 10 (68%) of Brits believe that if cars were sold online, pricing would have to be clearer and more consistent – like with the pre-haggled Renault Zoe installation.

A spokesperson for Auto Trader said: “Buying a brand-new car is an exciting experience, but it can often be tarnished by anxiety around haggling and knowing whether you’re looking at the right price.

“So today we’re showcasing a real-life version on what can be found on Auto Trader; brand new cars at transparent pre-haggled prices that you can drive away today.

“The only difference is that this Renault Zoe can be purchased at the touch of a card, testing London car buyers’ appetite for electric cars as well as a more instant purchasing future.”

The marketing campaign was devised and created by creative agency Taylor Herring, with the build, production and film managed by St Marks Studios.

The campaign follows a new study by the brand of 2,000 British motorists found over 9 in 10 Brits (92%) admitted they are bad at haggling when it comes to buying a car and 89% said they find haggling embarrassing and uncomfortable.

In fact, haggling on prices (41%) topped their list of anxieties about buying a new car, along with hidden costs (39%), worrying about making the wrong decision (28%) and having to wait a long time to receive a car after buying it (25%).